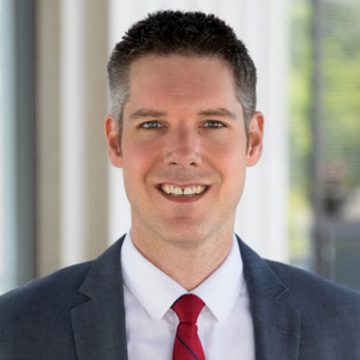 Mark Luebeck is an attorney and partner with the law firm of Angel, Coil & Bartlett. His law practice focuses on personal injury and insurance law and criminal defense.

Mark was born in Butte, Montana and spent part of his childhood in Seattle, Washington before returning to Montana. He has lived in Montana ever since. Prior to attending college, he served as a volunteer firefighter for Racetrack Volunteer Fire Department in Butte, Montana responding to structural fires and emergency calls.

He attended Montana Tech of The University of Montana where he received his bachelor’s of science degree in Occupational Safety and Health with High Honors (3.98 cumulative GPA). He received his law degree from The University of Montana where he served as an assistant editor-in-chief of the Montana Law Review, was a member of the International Law Society and was elected vice magister of the legal fraternity Phi Delta Phi. During law school, he served as an intern for the United States District Court for the District of Montana and interned with The University of Montana Office of Legal Counsel. Upon graduation, he was awarded the Scribes Award for administrative achievement as a member of the Montana Law Review.

Mark began his legal career serving as a law clerk for the Honorable Sam E. Haddon, United States District Court Judge, in Great Falls, Montana, a prestigious and highly competitive position within legal circles. During his clerkship, he was exposed to civil and criminal matters on a daily basis and observed and interacted with some of the best criminal defense attorneys in Montana, which solidified his interest in helping those accused of crimes by the all-powerful forces of the federal and state government. After his clerkship, Mark followed his passion for protecting individual rights and joined the Office of the State Public Defender in Bozeman, Montana as a trial lawyer. During his tenure with the public defender, he worked on countless felony and misdemeanor criminal cases and was awarded the Office of the State Public Defender’s first annual “Rookie Public Defender of the Year” award.

Mark joined Angel, Coil & Bartlett as a partner in April 2008 and continues to focus on personal injury and insurance matters and criminal defense. He is admitted to the State Bar of Montana, the U.S. District Court for the District of Montana, and the U.S. Court of Appeals for the Ninth Circuit. He is a member of the Montana Bar Association, the Montana Trial Lawyers Association, The National Trial Lawyers Top 100, The American Society of Legal Advocates Top 100, the Gallatin County Bar Association and is a lifetime member of the Montana Association of Criminal Defense Lawyers. He has a passion for all things political with a particular interest in individual rights.

On his free time, Mark enjoys trail running, biking and winter sports with his wife, children and two bird dogs and spends as much time as possible in Montana’s Wilderness complexes. He is an avid runner and has recently competed in several ultra marathons, including the classic 100 mile Javelina Jundred in 2019.

The National Trial Lawyers – Top 40 Under 40

Mark was a member of The National Trial Lawyers Top 40 Under 40 from 2012 through 2015 for both civil and criminal practice prior to becoming a NTL Top 100 Trial Lawyer. The National Trial Lawyers: Top 40 Under 40 is a professional organization comprised of America’s top young trial attorneys. Membership is by invitation only and is extended exclusively to those trial lawyers practicing civil plaintiff and/or criminal defense law. Invitees must exemplify superior qualifications, trial results, and leadership as a young lawyer under the age of 40.

Mark became a member of The American Society of Legal Advocates Top 100 Lawyer in 2016. According to ASLA: “ASLA limits its membership to less than 1.5% of all licensed lawyers nationwide. We select outstanding lawyers in all states, featuring no more than 100 lawyers per state…. ASLA aims to serve as a go-to source of exceptional legal advocacy, and, in turn, to strengthen professional relationships and best practices among member lawyers. Our Top 100 Lawyers in a given specialty include seasoned veterans with demonstrated excellence in their field and a sustained commitment to the profession.”

The American Society of Legal Advocates – Top 40 Under 40

Mark became a member of The American Society of Legal Advocates Top 40 Lawyers Under 40 from 2013 through 2015 prior to becoming a ASLA Top 100 Lawyer. ASLA Top 40 Lawyers Under 40 selection is by invitation only and recognizes exceptional legal talent and early promise among the next generation of great lawyers. ASLA limits its membership to less than 1.5% of all licensed lawyers nationwide.

The Montana Trial Lawyers Association is an organization of attorneys who represent litigants to secure a just result for the injured, the accused, and those whose rights are jeopardized.

The Criminal Trial Lawyers Association is a networked group of attorneys who specialize in criminal defense.